Victories for Aluminos During Month of May 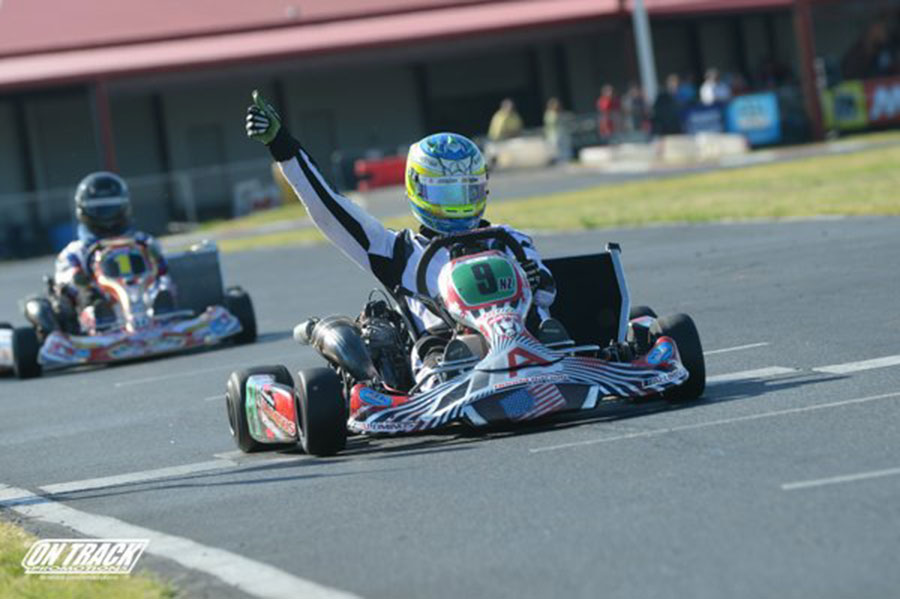 Success continues for the Aluminos brand as it nears the one-year anniversary. Securing a victory at the Superkarts! USA SummerNationals last season in its national stage debut, the Aluminos chassis was at the top of the podium in Las Vegas for the SKUSA SuperNationals thanks to New Zealand driver Matthew Hamilton. The Kiwi driver returned to the United States, helping Aluminos complete the tri-fecta, earning a win at the SKUSA SpringNationals event at the Dallas Karting Complex. The entire Aluminos squad showed speed throughout the May 2-4 weekend in Caddo Mills, Texas, setting up for another solid SKUSA Pro Tour campaign in 2014. Later during the month of May, the Aluminos brand earned two more checkered flags at the recent Red Line Oil Karting Championship event in Sonoma, California.

Hamilton, visiting the Texas facility for the first time, got up to speed quickly and was in the hunt for S4 Master Stock Moto glory during the opening round on Saturday. Winning the second heat race gave the Aluminos driver the pole position for the main event. After fighting early for the lead position and escaping trouble with lap traffic, the Kiwi driver survived and conquered the race to earn Aluminos chassis its first SpringNationals victory. Hamilton came back on Sunday as the driver to beat after just missing out on the top spot in qualifying. He drove his Aluminos Rio chassis to the win in both heat races while recording the fast lap of the races in the process. The opening lap of the main event did not favor Hamilton, as he slipped back to fifth. Trying to find his way forward quickly, some contact was made and Hamilton received the worse of the action. He spun off into the barriers and was unable to continue. While recording a DNF, the New Zealander is second in the championship standings with ground to make up at the SummerNationals in August. 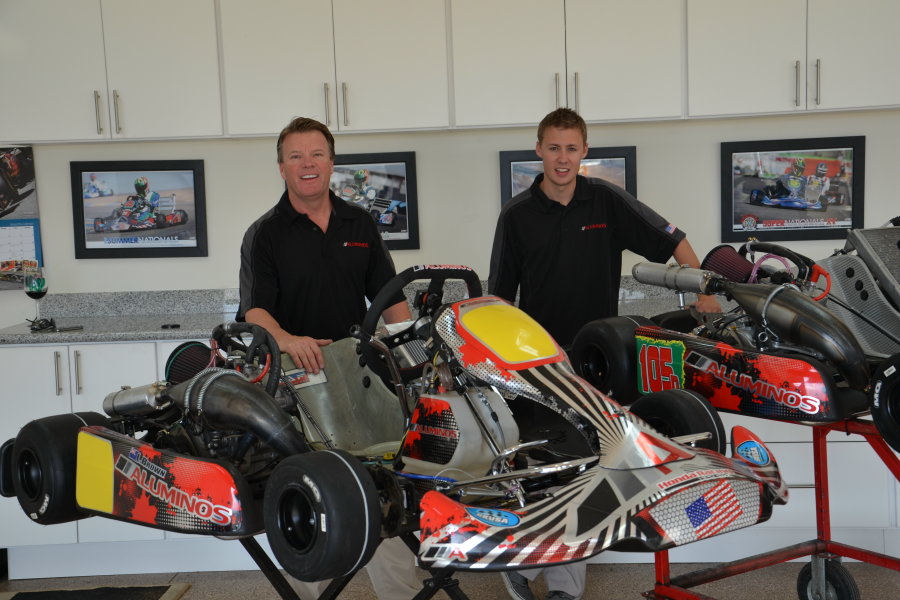 The Aluminos chassis brand has built a solid reputation in less than a year, hitting the United States karting scene by storm. The northern California-based operation is now expanding their efforts east, partnering up with S1 Pro driver Cory Milne and his father/tuner Brian Milne to open a Denver-based shop – Aluminos Denver. The new business officially opened April 1 after a culmination of several months of discussions between Aluminos owner Rob Soares and the Milnes.

“We have been talking with Rob for months on how we could team up with him and his race team to provide top notch race support to the Colorado-based shifter community,” stated Brian Milne of Aluminos Denver. “We have been racing under the Aluminos flag for over five years, as both Cory and I have learned a significant amount working with Rob, George Tavares the engine guru, along with driver coaches Tom Dyer and Fritz Leesmann. Competing under the Aluminos tent has given me a broader understanding of what it takes to be the top karting team in the United States. Make no mistake about it, Rob and his team has shifterkarts down to a science, using state of the art data collection, hours of chassis testing and engine tuning. Our goal is to utilize Rob’s team and expand upon it here in the Denver market. Team members from California will be available to Aluminos Denver for chassis setup, engine tuning and team equipment. We will have access to the extremely competitive Aluminos chassis, driver coaching techniques and the best engine program around. Colorado has some of the best drivers in the country and now will have access to the best karting team in the country.” 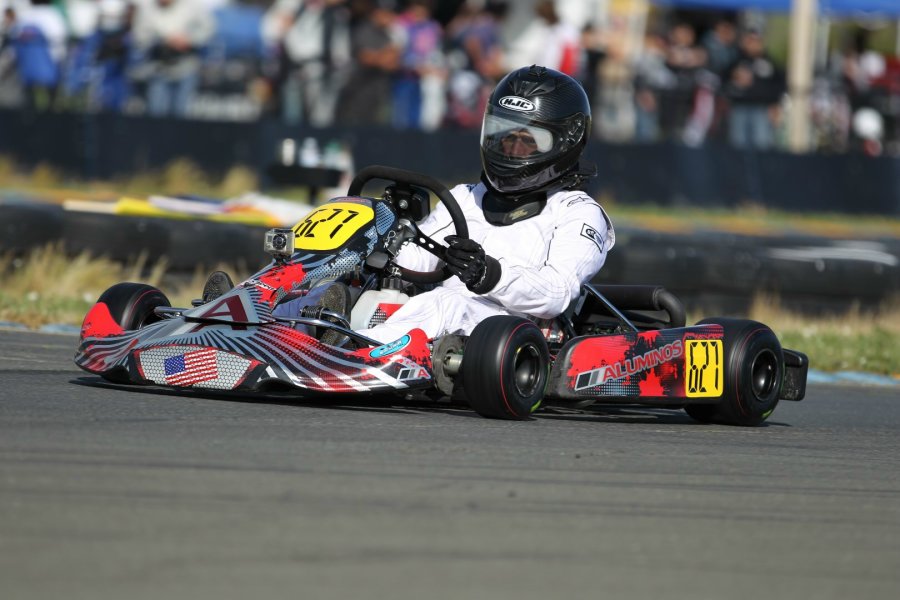 Enjoying success from season to season is nothing new for Team Aluminos. Though the 2014 season is young, Aluminos and its chassis brand is already putting up strong results to start the year. At the end of March, the northern California karting team contested the opening round of the Red Line Oil Karting Championship at the SimracewayPerformanceKartingCenter in Sonoma. Aluminos drivers put in a solid weekend of racing to kick off the growing regional series in strong fashion. Led by Stephan Gaudreau’s win in Rotax Masters, Team Aluminos recorded a podium finish in Micro Max along with a host of top-10 performances.

Gaudreau began his Round One victory at the RLOKC by qualifying third in the timed session, two tenths off of the pole position. Gaudreau worked his way up to second by the third lap after falling to fourth at the start of the first heat race, which is where he would finish the race. Gaudreau slipped at the start of heat two, dropping to the fifth position before regaining his lost ground to finish third. The Aluminos crew put together a solid game-plan and set-up for the main event on Gaudreau’s Aluminos chassis to contend for the win. Gaudreau drove consistent and fast laps, despite a dust up at the start that would drop him to fifth on the opening lap, working his way back up the leaderboard. By lap 10, Gaudreau had taken over the lead. Fending off challenges for the final five laps, Gaudreau drove to the first main event win of the season and established himself as a threat for this years championship. Behind Gaudreau was Team Aluminos driver Billy Scott. The opening round went well for Scott as he fought to stay in the top-10 all day and finish in the 10th position in the main event. 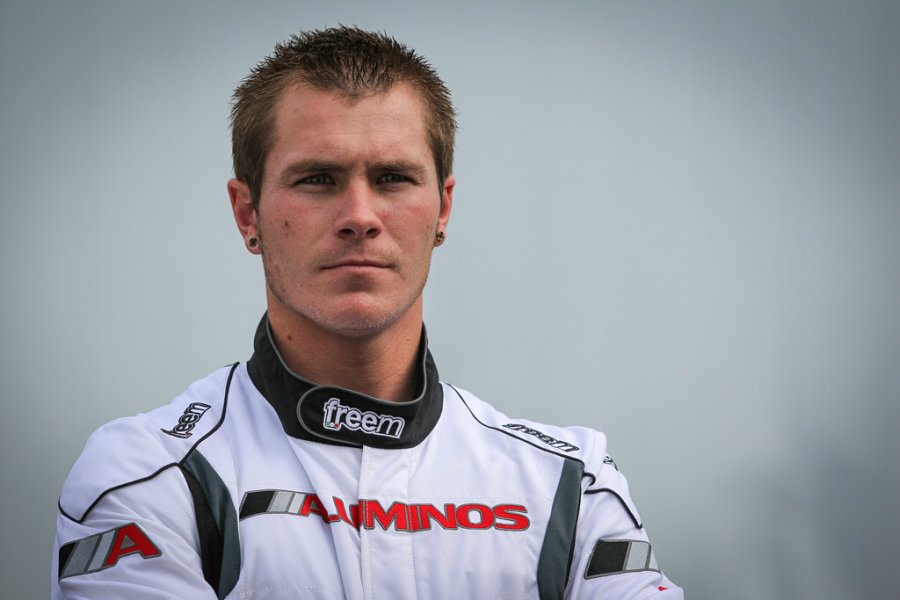 The winter months between the old and new karting schedules are often referred to as the ‘silly-season’, where drivers often look to join new operations and move to new equipment. For the prominent teams like Aluminos, there is no real ‘off-season’, as work continues from the last race of one season through to the opening event of the new year. Included in the tireless preparation that Team Aluminos has put in over the last few months is the addition of long-time associate and friend Fritz Leesmann to the driver roster for the 2014 season. The two-time Superkarts! USA Pro Tour S1 Pro Stock Moto champion is set to pilot the new yet very successful Aluminos chassis during the upcoming SKUSA Pro Tour season, including the SKUSA SuperNationals XVIII in Las Vegas come November.

Aluminos Logo“I’ve had the chance to watch first-hand how Fritz has grown as a driver and a person over the years,” stated Aluminos owner Rob Soares. “He’s been like family for many years. Behind the wheel, he is a very talented driver, however outside the seat, his work ethic is second to none. No matter the task, he gets the job done. Many of our drivers under the tent have already worked with Fritz as a driver coach, and they know that he is a great asset. His addition to our already knowledgeable roster of mechanics, tuners and driver coaches elevates our program even more. It was his own decision to come and work with Aluminos full-time, and I, along with the rest of the crew, couldn’t be happier to have Fritz with us.”