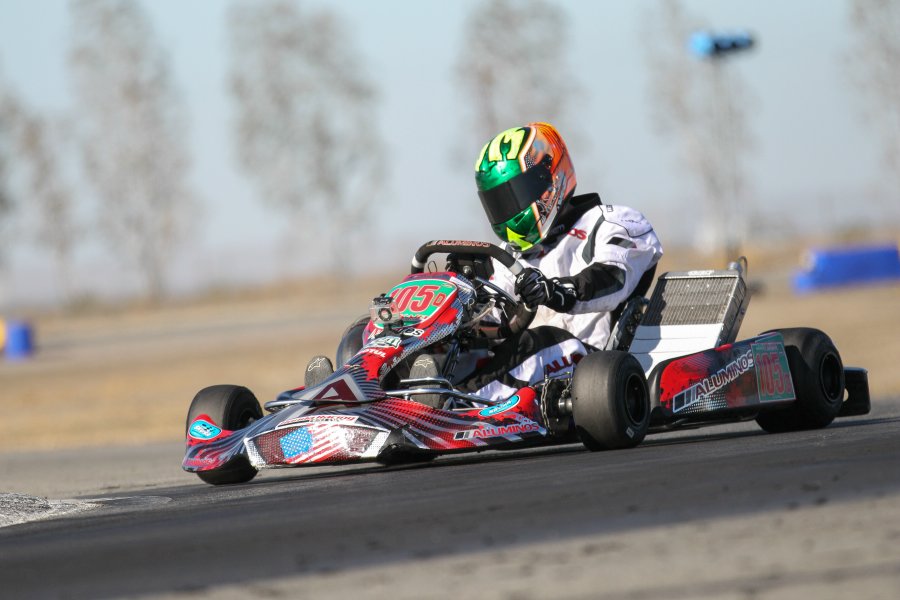 The 2013 season was big for Team Aluminos, as the NorCal-cased karting operation launched its own chassis and won a number of major events. Victories in club, regional, national and international competition fueled incredible momentum and high expectations for this year’s campaign. ‘Off-season’ preparations were non-stop, as the squad was focused on coming out of the box strongly. Fully-prepped, Team Aluminos kicked off their new season this past weekend at the opening round of the Superkarts! USA California ProKart Challenge, firing up a schedule that will see them run both the PKC and the SKUSA Pro Tour. Rob Soares and his Aluminos squad enjoyed a successful weekend at the ButtonwillowRacewayPark as their drivers ran near the front, all aboard the team’s Aluminos chassis.

Team Aluminos got the weekend rolling in style early Saturday morning when Colorado’s Cory Milne laid down a 44.244-second run in qualifying to earn the S1 Pro Stock Moto pole. In the first heat, Milne rebounded very well from a slow launch off the grid to drive back to a solid third place finish. The second heat race went well for Milne, as he remained in the top-five to earn a spot on the outside of row two to start the main event. Cory was shuffled back at the start, but the pace of the Aluminos chassis was strong throughout the 20-lap distance, which gave him the ammo he needed to steer himself back to a fourth place finish, posting the fastest lap in the S1 category. It was a great start to the season for the sophomore Pro pilot. Former PKC frontrunner Brad Dunford made his return to Team Aluminos in Buttonwillow after a year away from the sport. A DNF in heat one put him behind the eight ball, but Dunford gained back a few positions in Heat #2 and improved a couple more spots in the main event to end the day with an eighth-place result in his return to the seat. 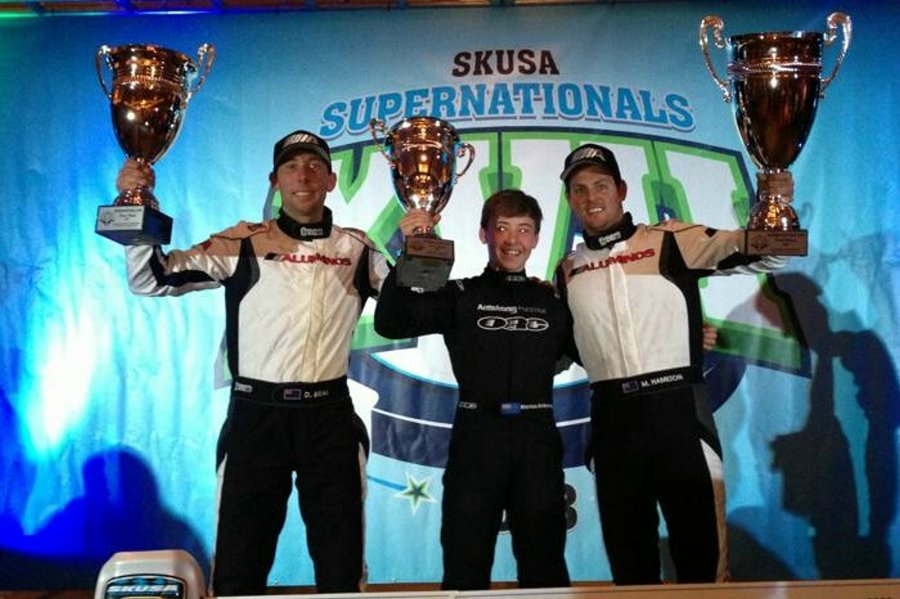 Making history this year, the Aluminos operation introduced their own chassis to the North American market and found success right out of the box. Debuting at the Superkarts! USA SummerNationals three months earlier, the Aluminos chassis made its SuperNationals debut this past November at the 17th annual SKUSA SuperNationals in Las Vegas, Nevada. The final stop on the SKUSA Pro Tour and the second national race for the new chassis went very well as the team left with a SuperNats victory, two podium finishes as well as a collection of strong performances from all Aluminos team drivers.

“It’s been a great five months for Aluminos,” stated owner Rob Soares. “We earned victory at our first national event with the new chassis, and it has continued to win at the regional and national level, including the Red Line Oil Karting Championship here in Northern California and the SKUSA Pro Tour. The Sonoma chassis has proven well in the shifterkart categories, and the new Estorli for TaG competition is now ready to contend for major titles in 2014. I couldn’t be happier with the performances we had in Las Vegas for the SuperNationals with all the weather issues, and it’s great to see Aluminos on top once again. An interesting fact, seven drivers have won their first race aboard the Aluminos chassis, including myself, Fraser, Bray, Toft, Buckwalter, Calderon and now Hamilton. It’s an exciting time for us here at Aluminos.” 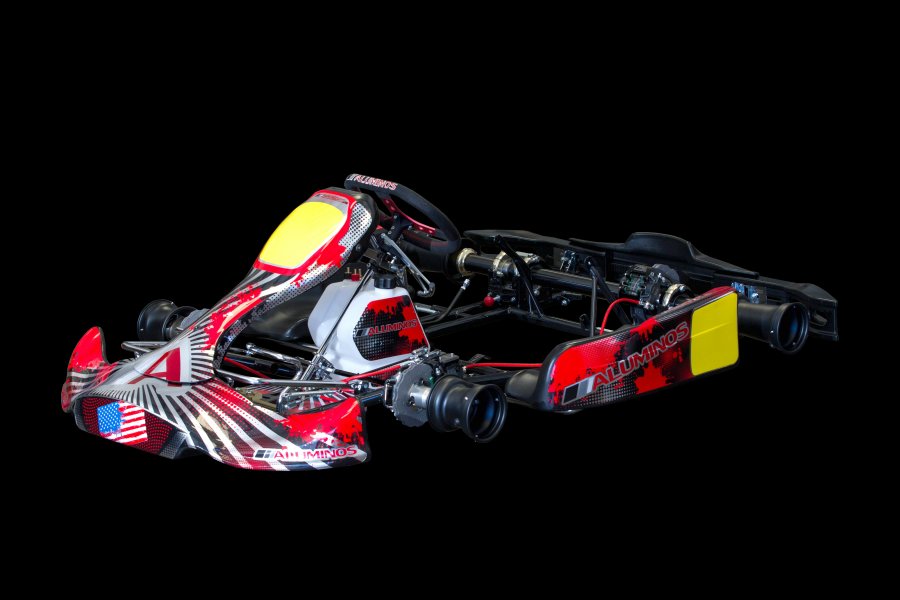 The New Aluminos chassis earned a second victory at the Red Line Oil Karting championship finale, and is primed for its debut at the SKUSA SuperNationals XVII

The 2013 season is finishing up, and the Aluminos program is rolling strong. Recently, the Northern California operation finished up the 2013 Red Line Oil Karting Championship at the Simraceway in Sonoma, California (November 2-3). Aluminos contested the full season, earning victories each and every round, ending with another victory with veteran Brett Buckwalter. And looking ahead to next week, the race team and chassis brand will field 24 drivers for the Superkarts! USA SuperNationals XVII.

Aluminos owner Rob Soares and his team made some noise in the final round of the RLOKC season, and no where else was that more evident than in the Pro Stock Honda class. A quartet of talent drivers carried the banner for Aluminos that included Tom Dyer, Jason Toft, Brett Buckwalter and Will Preston. Dyer, with Toft and Buckwalter swept the top three positions in qualifying, all aboard the Aluminos chassis. Finishing second in the prefinal, Buckwalter bought his time in the main event, taking the lead on the final lap to score Aluminos chassis its second straight victory in the series. Toft came from the back after engine trouble in the prefinal, driving his way to third. Preston ran as high as third in the feature, ending up with a solid fourth while Dyer overcame a poor start to place fifth – putting all four Aluminos drivers in the top-five. 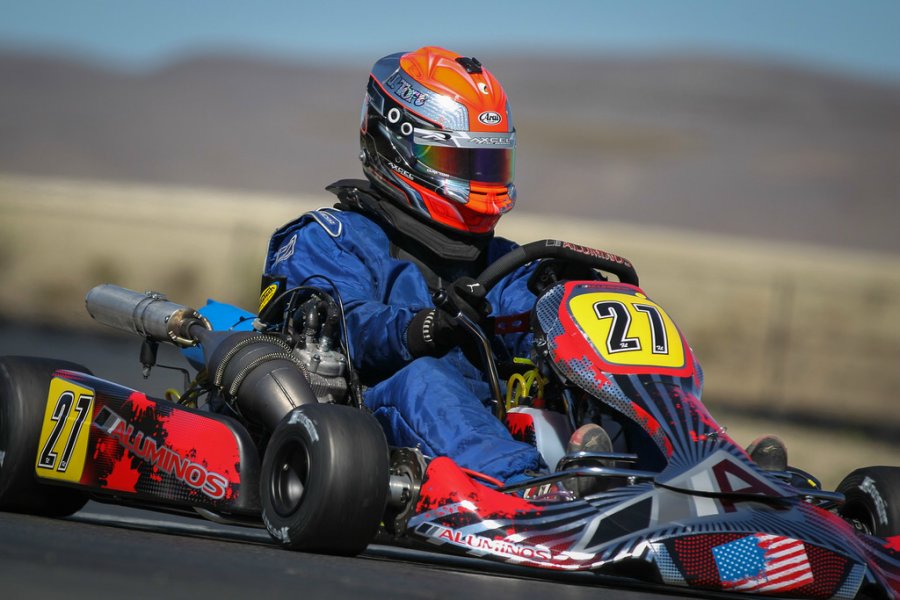 Jason Toft garnered another victory in the early months of the new Aluminos chassis (Photo: dromophotos.com)

Success has been synonymous with the Aluminos operation. During the October 12-13 weekend, the ninth round of the Red Line Oil Karting Championship took place at the SimracwayPerformanceDrivingCenter. The home track for Aluminos, its drivers felt right at home when racing at the historic Sonoma, California facility. The team saw great results on the weekend, including another victory for the new Aluminos chassis behind the talent of Jason Toft in the premiere Pro Stock Honda class and podium finish with Billy Scott in the Rotax Masters.

Petaluma, California’s Toft kicked things off Sunday morning when he beat out Aluminos teammate Will Preston for the pole position by just over a tenth of a second in Pro Stock Honda. In the first heat race, Toft led every lap but the last, as he was edged out for the win by new Aluminos chassis driver Brett Buckwalter. In the second heat race, Toft and Preston dueled in the opening laps, as Preston led the first lap. Toft would move into the lead and hold it for the rest of the race to secure the heat two win with Preston in second. Starting the main event on the pole position, Toft was set up to succeed in the feature race. Toft dominated as he led all 15 laps to score the victory, exactly one second ahead of the runner-up finisher. Preston, also aboard the new Aluminos chassis, was unable to shake off the bad-luck, and recorded an eighth place finish, just behind Andrew Vargas driving an Aluminos GP while Buckwalter struggled with engine issues in the main event.