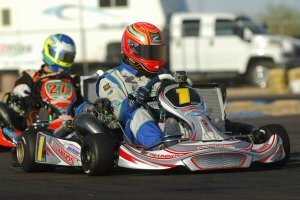 Bray made the long journey from New Zealand to defend his SKUSA Pro Tour championship in the S1 Pro Tour Stock Moto division, teaming up with Aluminos as he had in previous years in his trips to the United States. Carrying the #1 SKUSA plate for 2012, Bray was in the sights of every driver in the field. Among the leaders during testing, Bray clocked in the third quickest lap in qualifying to start Round #1. Going the wrong direction with the set-up in heat one, he lost a few positions but regained them back in heat two. Breaking away with two others in the main event, they were all evenly matched and Bray had to settle for third to start his title defense. The following day Bray was top dog in qualifying, breaking into the 44-second barrier and just missing out on the fastest lap of the weekend by three-hundredths of a second aboard his Aluminos-prepared GP/Stock Moto. A tad slow off the line, Bray lost the lead and ran second in heat one, losing another spot in heat two in similar fashion. Starting third for the main event, Bray worked his way into the second spot. Crossing the line in the runner-up position, officials ruled his defensive line was considered blocking, docking him one position. The Kiwi sits third in the championship chase, well within striking distance of the top spot. 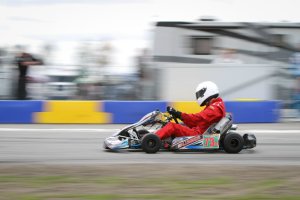 Brad Dunford (Photo: dromophotos.com)Team Aluminos’ 2012 Superkarts! USA ProKart Challenge campaign began with 6 drivers competing in 3 classes at Buttonwillow Raceway Park, and ended with a 1-2 punch on the podium in the premier class of racing.

Throw in a couple of 3rd place knockout performances, and it’s easy to see that this team may well be off to one of their best starts in 5 seasons of competition within the series.

Long-time team member Brad Dunford, began 2012 the same way he started the 2011 season en route to the S1 class championship by winning the S1 main event. He was followed by teammates Cory Milne finishing in 2nd and Kyle Hathcox in 6th. It was Dunford’s smart driving and patience that paid off, as it took a bit of good fortune, courtesy of a racing incident from the leaders, to cement the win. Dunford, who is being groomed for a career in racing, was solid all weekend, beginning with a qualifying run putting him at P4 to start the day. A heat one run to P3, and a consistent second heat slotted him in P3 for the start of the main. The plan for the final, according to Dunford was, “to keep pace and gain some time here and there on the leaders, and look for opportunities”. And that opportunity came when leader Jimmy McNeil and Clinton Schoombee tangled midway into the main. Dunford steered clear and into the lead going on to the race win. Said Dunford later at the hauler, “I’m so happy for this win, regardless of how they come because this class is so competitive and tough. It’s a great result to begin the year and quest to defend last year’s championship.”

ShopAluminos.com will feature new and used products available from Aluminos, Inc.Aluminos Inc. is proud to announce the creation of a new website for the company - ShopAluminos.com . The site will work as a catalyst to showcase the many new and used products available from the Northern California-based operation. Aluminos is an established national kart racing team that has established excellent credentials on and off the track within the karting industry since 2007. The Aluminos racing team has scored many race wins throughout the west coast regional programs, as well as at the national level - including the SKUSA SuperNationals and championships the past two seasons on the SKUSA Pro Tour in Stock Moto competition. ShopAluminos.com is an opportunity for the team to expand into the product sales side of the sport in a unique way.

“After operating a successful kart team for the past five seasons, we have gathered a number of karts and parts that have filled up space in the shop. ShopAluminos.com will not only allow us to sell these products to new and existing karters, but also allow us to showcase the number of new products we will be promoting in the 2012 season and beyond,” stated Aluminos owner Rob Soares. “We are unique because we are primarily a racing operation, working to reach the goals on-track for our customers more than producing products sales like a typical kart shop. This new site however will allow us to do both without taking focus away from our trackside support and driver development programs. It's lets us pass on many of our new and used team products to consumers who aren't directly involved with our team.” 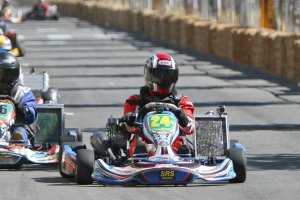 Kyle Hathcox scored the SKUSA Pro Tour S2 championship at the SuperNationals (Photo: dromophotos.com)The 2011 season wrapped up for the Aluminos operation with the 15th running of the Superkarts! USA SuperNationals at the Rio All-Suite Hotel and Casino in Las Vegas. While victories eluded the team and its 16 drivers under the tent, the week was a successful one for the Northern-California operation. Two drivers stood on the podium thanks to Aluminos-prepared Stock Moto packages while Arizona driver Kyle Hathcox locked up the S2 Semi-Pro SKUSA Pro Tour series championship.

Hathcox entered Vegas as the point leader in the S2 category with little room for error with a host of drivers close behind in the standings. Among the front runners in practice, qualifying came and the speed was gone as he clocked in 35th overall. Starting from row nine for each of the three heat races, Hathcox put in a championship-like performance in all three as he drove through the field. Recording results of second, eighth and fifth, he soared up the results order to start sixth in the main event. Quick early, Hathcox was on the edge of the top-five until his competitors began racing rough. Wise to stay out of trouble with the big picture in site, Hathcox elected to stay away from trouble despite falling down the order. Finishing 10th and keeping his championship rivals in close proximity; Hathcox earned the series championship and the coveted #1 plate for 2012.