Aluminos Prepares for More Success in 2011 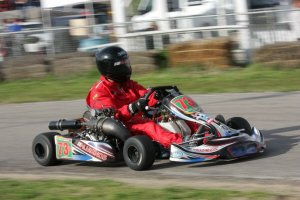 Aluminos S1 Pro driver Brad Dunford kicked off the year with first S1 Pro victory at the PKC South opener at Adams (Photo: dromophotos.com)It was a successful 2010 campaign for the Aluminos outfit, based out of Northern California. The professional kart racing team continued their yearly progression of delivering winning results, while once again proving they're a front running effort no matter where they compete. It's a stated goal for Aluminos to offer an environment which provides the best options for drivers at any skill level to learn and excel behind the wheel in a quest to achieve personal higher marks. With team testing already taking place in 2011, the pursuit to improve on the racetrack continues as evidenced with Brad Dunford's breakthrough first win during Round 1 of the ProKart Challenge South series race in the S1 Pro class.

“2010 was really successful for Aluminos and its drivers,” stated Aluminos owner Rob Soares. “As a team, we accomplished a lot of solid results. Our main concern, however, is how each driver reflects on their own personal season. Many ended the year with a positive attitude and feeling of accomplishment that they achieved personal goals. Whether it’s to learn the mechanics of the kart, scoring consistent top-five finishes or getting that breakthrough victory, we are here to make sure each driver strives to their fullest. It's a learning process for any driver to grow and improve and we're fortunate to have a stable of drivers that are dedicated and understand this. With that said we do like to have some fun along the way as that can never be overlooked.”

Aluminos’ Fritz Leesmann celebrates his 2010 SKUSA Pro Tour S1 championship (Photo: On Track Promotions - otp.ca)The Superkarts! USA SuperNationals XIV in Las Vegas last month closed out the 2010 racing season for Team Aluminos. The Northern California karting operation put in a solid effort over the course of 12-months, providing one of the best options for drivers to learn and excel behind the wheel. With 20 drivers under the tent outside the Rio All-Suite Hotel and Casino, the five-day event was busy with action for Aluminos equaling to mix-results. Coming away the big victor, Aluminos driver coach and S1 Pro Stock Moto driver finished runner-up in the main event and scored the SKUSA Pro Tour championship.

Leading the way for Aluminos in Vegas, Leesmann entered the event as the championship leader for the S1 category. Qualifying third, Leesmann held the spot through the three heat races to line up inside row two for the main event. Getting off the line clean, the front of the S1 field shuffled around during the first half of the race until the drivers settled in. Finding himself back in the third position once again, Leesmann held his ground until the closing laps when he advanced to second with four to go. Running times matching the leaders pace, Fritz would take the checkered flag in the runner-up position, clinching the first national championship for the Elk Grove, California driver and Team Aluminos. Leesmann earned a payday of $5,000 for his efforts and will carry the #1 plate in 2011.

A third SuperNationals victory slipped from Tom Dyer’s grasp in the main event after showing the possibility of a win. The lead driver coach for Aluminos strapped on the helmet once again to defend his Stock Moto victory from 2009. Starting fourth, Dyer was involved in an opening lap skirmish and fell down the order to 12th. While working his way up through the field, contact took Dyer out of contention after moving into the seventh spot. A plus was the performance by Aluminos driver Brad Dunford. Qualifying sixth, Dunford held his ground and starting the feature race from the same position. Getting a great start, the Cypress, CA driver was second by the completion of lap three and into the lead on lap four. His run at the point was short-lived, losing the spot the next time by and eventually fell outside the top-five. Finishing eighth, Dunford’s run was his best of his career at the SuperNationals. 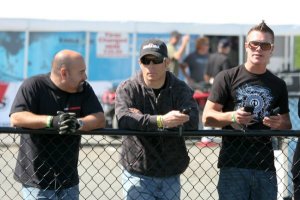 Rob Soares, Tom Dyer and Fritz Leesmann along with George Tavares (not pictured) are the key components to Aluminos’ success (Photo: Tony Leone - sixspeedphotos.com)The Aluminos Racing Team will celebrate its three year anniversary in November at SKUSA SuperNationals XIV. The Aluminos race program has experienced its best season thus far and is looking to cap off the 2010 season in Vegas next month adding more event titles to its resume. Leading up to the highly-anticipated event, the Aluminos squad has spent the first 10 months of 2010 developing its program, from the drivers behind the wheel to the machines they pilot to victories.

The Aluminos story of origin came about in 2007 and is the brainchild of Northern California karting veteran Rob Soares. Focused on manufacturing kart racing specific products, the company grew quickly and within months of its launch, Soares saw the need to create a different kind of racing program which made its debut at the 2007 SKUSA SuperNationals. Since then, Soares has continued to refine and accumulate pieces to make the racing operation one of the top programs in the United States. From top to bottom, the Aluminos mantra is to improve both on and off the track collectively as a unit and individually, allowing their drivers to continually improve and experience positive results. 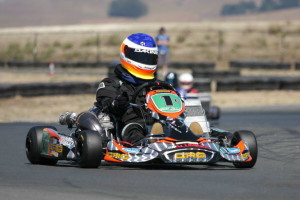 Jeff Smith accomplished his sixth straight S4 PKC North victory at the series finale (Photo: Tony Leone - sixspeedphotos.com)The 2010 season has been a very successful run for the Team Aluminos squad and its drivers. Performance on track has shined from January until now with solid off-track preparation and on-track training sessions by the experienced and talented Aluminos staff. With that, the results have spoken with two ProKart Challenge North championships added to the trophy case after the sixth round of the program on September 3 at the Jim Russell International Karting Center. Jeff Smith continued his winning streak and scored again in the S4 division while Fritz Leesmann clinched the title in the headline S1 category.