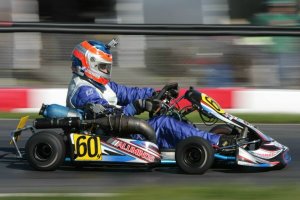 Aluminos’ new team member Casey Scherer earned a debut victory in the S4 Master Stock Moto category in Dixon (Photo: dromophotos.com)The 2011 season began similar to last year with Aluminos coming out on top. The professional kart racing team based in Northern California made its first start of the 2011 season at the Superkarts! USA ProKart Challenge North program at the Kinsmen Kart Club facility in Dixon, CA. Following Brad Dunford’s victory at the opening round of the PKC South program a month ago, the full operation trekked out to the track for its official debut, this time with new team member Casey Scherer as he earned the victory in S4 Master Stock Moto category.

The field in the S4 division was dominated with drivers from under the Aluminos banner. Team manager Rob Soares strapped on the helmet to make his class debut on the weekend. Soares set the tone early as he grabbed the pole position with a 28.408-lap time. Colorado driver Mike McDonough was just a bit off Soares time to sit second in the order. Scherer began his debut with Aluminos with the fourth best time in the session while David Conyers and Jonathon Allen sat fifth and sixth. 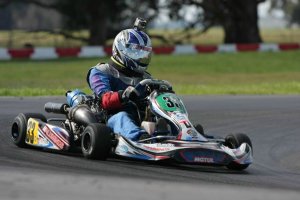 David Conyers gained valuable experience in his first S4 Master outing of the 2011 season (Photo: dromophotos.com)Soares led the way through both heat races, leading all 24 laps with consistent lap times along the way. Conyers and Scherer exchanged the runner up spot while McDonough was a solid third in both heat qualifiers. The main event, however, would be just Soares and Scherer as the rest of the Aluminos squad would run into trouble. McDonough was involved in an opening lap incident that took him out of the running. Conyers would experience contact on lap two with another competitor damaging his radiator and forcing him to the sidelines as the radiator started spewing water. Bad luck continued for Allen as he too retired when teammate Conyers radiator issues occurred and he spun off of the track. Soares led the feature before Scherer overtook the team boss on lap seven. The two ran nose to tail until Soares misjudged a passing opportunity on lap 16. Instead of taken both drivers out, Soares spun himself away from contact and put his entry on the sidelines for the remainder of the race. Scherer, who last raced in 2008 and rented a kart from Aluminos for this event, went on to score his debut victory by 16.102-seconds and earn fast lap honors laying down a 28.260.

The team will be in full force at the upcoming ProKart Challenge South event at the Willow Springs kart track in Rosamond, CA on March 11-12. While putting in solid results at the regional level is still a priority, Aluminos is gearing up for the first round of the SKUSA Pro Tour, April 29-May 1 in Tucson, Arizona. Aluminos is still accepting any inquires for specific Arrive and Drive packages around your needs for the 2011 season. Any interested parties wishing to learn more about this professional team are asked to contact Aluminos at 925.786.7865 or visit them online at http://www.aluminos.com as well as sending Rob Soares an e-mail to This email address is being protected from spambots. You need JavaScript enabled to view it.