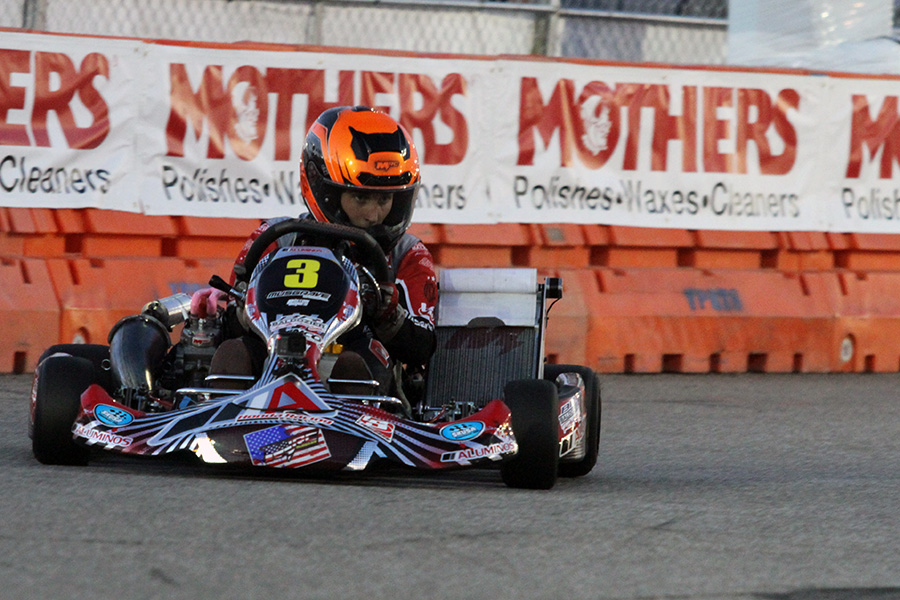 Billy Musgrave ended the season with victory at the Streets of Lancaster Grand Prix and scored the Pro Shifter win at the SuperNationals (Photo: eKartingNews.com)

Success continued throughout the 2018 season for the Aluminos chassis in North America. The hours and days of hard work put in between race weekends, testing and development paid off with a solid finish to the season for the brand. Two of the biggest events for Aluminos come at the end of the season with the Streets of Lancaster Grand Prix in southern California and the annual Superkarts! USA SuperNationals 22 in Las Vegas, as each provide their own unique challenges and excitement, and both ended with Aluminos raising trophies in victory.

“The success we have is due to the people who surround what we do,” stated Aluminos owner Rob Soares. “The people involved in the development of the chassis love what it is we stand for. We work hard, play hard, and have a true passion for the sport of karting. We want to provide the best product possible, and the results continue to show that. But it truly begins with the talented people like George Tavares, Tom Dyer, the crew at Musgrave Racing Company, and all the drivers and families that work with us throughout the season.” 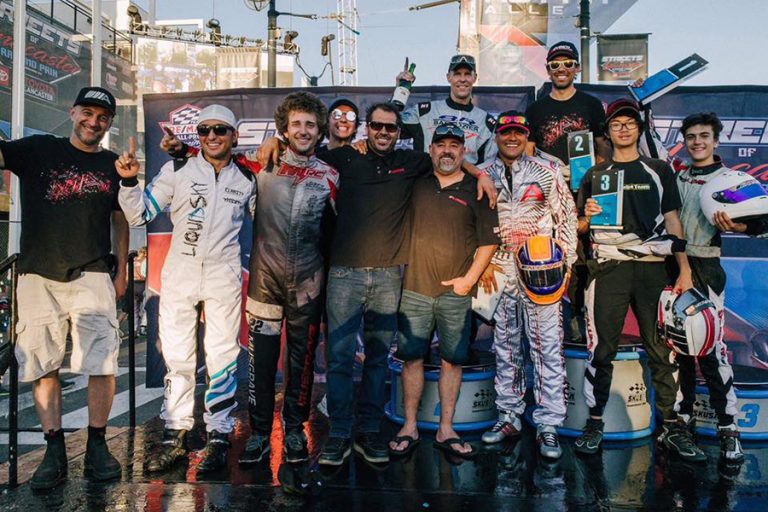 Members of the Aluminos team celebrate during the Streets of Lancaster Grand Prix ceremony (Photo: Aluminos.com)

The end of the year began with the final event for the California ProKart Challenge – the annual Streets of Lancaster Grand Prix. Held at the end of September, the two-day event welcomed racers from all over the country to compete on the southern California city’s streets for the 10th time. The Aluminos team came away with three victories, delivered by three series champions. Billy Musgrave won the headline S1 Pro Stock Honda aboard his MRC Aluminos chassis. Musgrave became the first driver in California PKC history to sweep the entire season, leading the qualifying, Prefinals and Finals in all six rounds of 2018. The highlight of his PKC season was his wire-to-wire victory under the lights at Streets of Lancaster, earning him his first career victory at the event.

S4 Super Master Stock Honda driver John Crow secured his first career Streets of Lancaster victory aboard his MRC Aluminos. Crow posted his fifth victory of the season to claim the series championship, along with being named the Streets of Lancaster Grand Prix Scholarship 2019 driver. The $15,000 package includes entry to the California ProKart Challenge and SKUSA Pro Tour for next season.

A third victory and championship title came in the S5 Junior Stock Honda division. Jacopo Pizzinato won the main event on Sunday by over two seconds, helping to secure his second-straight California PKC championship in the category. At the same time, Kyle Loh grabbed his third podium of the season, a result that would position him in third in the S3 Novice Stock Honda class standings, one spot behind fellow Aluminos driver Eddie Tafoya. Mike Mantel and Jim Kidd added podium results for Aluminos in the S4 and S4 SM divisions, each placing third in their respective classes. For a fourth time on the year, Carlos Calderon placed second aboard his Aluminos in the X30 Master class. That runner-up finish locked up the vice-champion position in the standings.

The final stop on the 2018 calendar was the Superkarts! USA SuperNationals 22. Over 500 drivers from around the world converged on the Rio All-Suite Hotel & Casino in Las Vegas. Aluminos was well represented in the two Stock Honda classes – Pro Shifter and Master Shifter. It was a near sweep of the SuperNats for defending race winner Billy Musgrave. The only slip up was in Heat #2, where he dropped to fifth. Aside from that, Musgrave was P1 in all the other sessions, including leading wire-to-wire in the main event on SuperSunday for his third career SuperNationals victory. Kiwi Matt Hamilton, the first driver to ever win at the SuperNats aboard a Aluminos, placed third to earn a fourth straight podium in the Pro Shifter division. Pro Shifter rookie Jason Pettit, who was the provisional winner in S2 last year before a jump start penalty took the victory away, redeemed himself in 2018. While it was not a win, it was a top finish by a first-year Pro Shifter starter, as the Aluminos driver was one spot short of the podium in sixth. 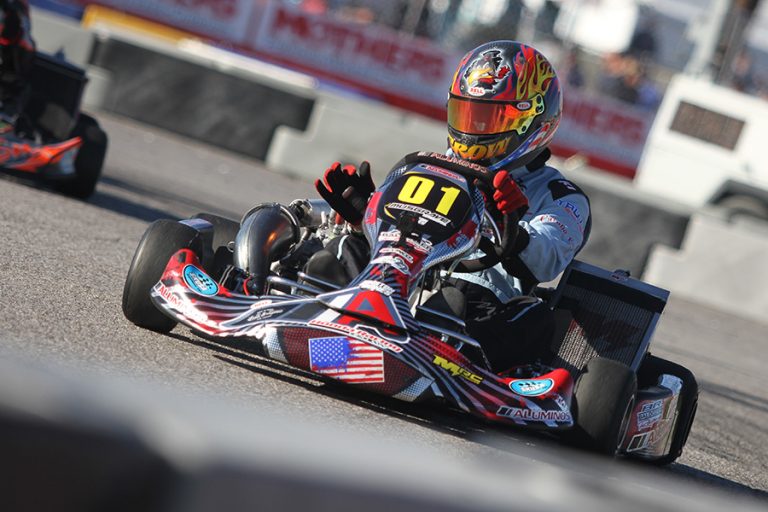 John Crow won at the Streets of Lancaster Grand Prix and placed on the podium in Master Shifter at the SuperNationals (Photo: eKartingNews.com)

John Crow ended the 2018 schedule as the top Super Master driver in the Master Shifter race, landing on the podium in the fifth position. Crow had his Aluminos up to third at one point, settling back into the final spot on the podium by the checkered flag. Tiffany Hamilton, Nick George and Jimmy McNeil made it four Aluminos drivers in the top-10 of the Master Shifter main event. Carlos Calderon wrapped up the top-10 performances for Aluminos at the SuperNationals, placing eighth in X30 Master.

“Billy’s victory is our third at the SuperNationals, dating back to our first in 2013 with Matt in S4 Master,” added Soares. “Since then, we’ve had at least one podium finish each year at the SuperNats. Everyone worked their butts off in Vegas to get to where we were. I can say that each and every driver we had in Vegas reached a goal throughout the week. No one else in the paddock can say that. I’m very proud of our performance there and throughout the 2018 season, and can’t wait to see what we will do in 2019.”

Aluminos will continue to support the SKUSA Pro Tour, California ProKart Challenge and expanding to more events throughout the country in 2019. For more information regarding the Aluminos chassis, or the successful race team, visit www.aluminos.com or check them out on Facebook.