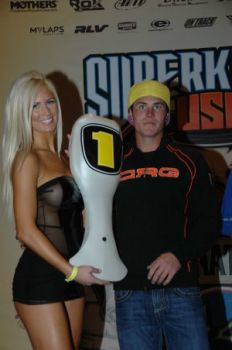 Aluminos’ Fritz Leesmann celebrates his 2010 SKUSA Pro Tour S1 championship (Photo: On Track Promotions - otp.ca)The Superkarts! USA SuperNationals XIV in Las Vegas last month closed out the 2010 racing season for Team Aluminos. The Northern California karting operation put in a solid effort over the course of 12-months, providing one of the best options for drivers to learn and excel behind the wheel. With 20 drivers under the tent outside the Rio All-Suite Hotel and Casino, the five-day event was busy with action for Aluminos equaling to mix-results. Coming away the big victor, Aluminos driver coach and S1 Pro Stock Moto driver finished runner-up in the main event and scored the SKUSA Pro Tour championship.

Leading the way for Aluminos in Vegas, Leesmann entered the event as the championship leader for the S1 category. Qualifying third, Leesmann held the spot through the three heat races to line up inside row two for the main event. Getting off the line clean, the front of the S1 field shuffled around during the first half of the race until the drivers settled in. Finding himself back in the third position once again, Leesmann held his ground until the closing laps when he advanced to second with four to go. Running times matching the leaders pace, Fritz would take the checkered flag in the runner-up position, clinching the first national championship for the Elk Grove, California driver and Team Aluminos. Leesmann earned a payday of $5,000 for his efforts and will carry the #1 plate in 2011.

A third SuperNationals victory slipped from Tom Dyer’s grasp in the main event after showing the possibility of a win. The lead driver coach for Aluminos strapped on the helmet once again to defend his Stock Moto victory from 2009. Starting fourth, Dyer was involved in an opening lap skirmish and fell down the order to 12th. While working his way up through the field, contact took Dyer out of contention after moving into the seventh spot. A plus was the performance by Aluminos driver Brad Dunford. Qualifying sixth, Dunford held his ground and starting the feature race from the same position. Getting a great start, the Cypress, CA driver was second by the completion of lap three and into the lead on lap four. His run at the point was short-lived, losing the spot the next time by and eventually fell outside the top-five. Finishing eighth, Dunford’s run was his best of his career at the SuperNationals.

The second Pro Tour championship earned by Team Aluminos came thanks to the talents of Fernando Diaz. The newly crowned G1 national champion won a feature race at both the SpringNationals and the SummerNationals. His solid seventh place performance at the SuperNationals secured the title. Colorado driver David Conyers recorded his best finish in Vegas in the last three years. Working with Aluminos throughout the 2010 season, Conyers advanced from a 23rd starting position to finish 18th after 20 laps. Denmark driver Henrik Hojman also improved in his SuperNationals performance in his third try with Aluminos, placing 24th. 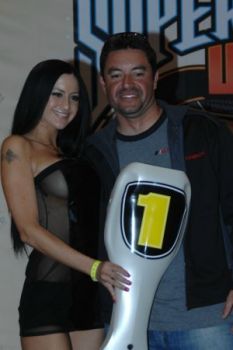 Fernando Diaz completed the 2010 season as the champion in the G1 category under the Aluminos banner (Photo: On Track Promotions - otp.ca)The S4 Master Stock Moto contingent for Team Aluminos recorded impressive results throughout 2010, including the SuperNationals, helping to secure four positions in the top-five slots of the Pro Tour championship standings. Five Aluminos drivers finished inside the top-11 in Vegas, exemplifying the package Aluminos can put together for any type of karter. One result of that was Mexican driver Eduardo Pena, making his first SuperNationals start in the category. Pena led the way for Team Aluminos despite a stacked driver roster, posting a podium finish of fifth place aboard an Aluminos Arrive-and-Drive machine. Phil Dunford, Mike McDonough, Jeff Smith and Kiwi driver Mark Swetman overcame tough heat results to advance in the main event, finishing ninth thru 12th and recording their best results at the event. For Smith and Dunford, their results propelled them into fourth and fifth in the Pro Tour standings, behind Aluminos drivers Peter Workum and Jonathon Allen who both retired early in Vegas due to contact.

Another driver cashing in on the SKUSA Pro Tour championship standings is Larry Fraser. Running TaG Senior throughout the year, Fraser earned the second position in the final standings and took home $2,000 for his effort. Competing in the TaG Master division in Vegas, the Novato, CA driver put in one of the best ‘hard charger’ performances of the event. Qualifying sixth overall, two DNFs put Fraser 25th on the main event starting grid. Knifing his way through the field, Fraser ended up 10th after 20 laps.

Top-10 finishes came in S2 Semi-Pro Stock Moto and S5 Junior Stock Moto categories for Team Aluminos. Joining the operation for his first event, Colorado driver Cory Milne put in his best SuperNationals results as he drove from 14th to 10th in S2. Piloting the first S5 Arrive-and-Drive package for Team Aluminos, Mexican Guillermo Santibanez came from 17th on the starting line to end up seventh at the checkered flag for an impressive performance for his first trip to the SuperNationals. Other drivers under the Aluminos tent included Andrew Vargas (KZ2 - 30th) and Denmark’s Michael Bo Andersen (KZ2 - 37th). Kyle Hathcox started eighth in the S2 category and was fighting for a podium finish until a major wreck involving two others took him out of contention. Classified 32nd in the final results, the 18-year old was taken to the hospital but was cleared of any series injuries.

The Northern California-based operation is proud of the results garnered in 2010 and is now looking forward to the 2011 season starting in February. Team Aluminos will once again campaign the ProKart Challenge South, ProKart Challenge North and SKUSA Pro Tour next season and is currently accepting inquiries to arrive-and-drive opportunities for the year. The successful Aluminos program will devise a specific plan around the driver’s need and kart package, including pre-race testing options. Testing is set to begin in January and anyone interested in learning more about this professional team are asked to contact Aluminos at 925.786.7865 or visit them online at http://www.aluminos.com . You can also e-mail This email address is being protected from spambots. You need JavaScript enabled to view it.